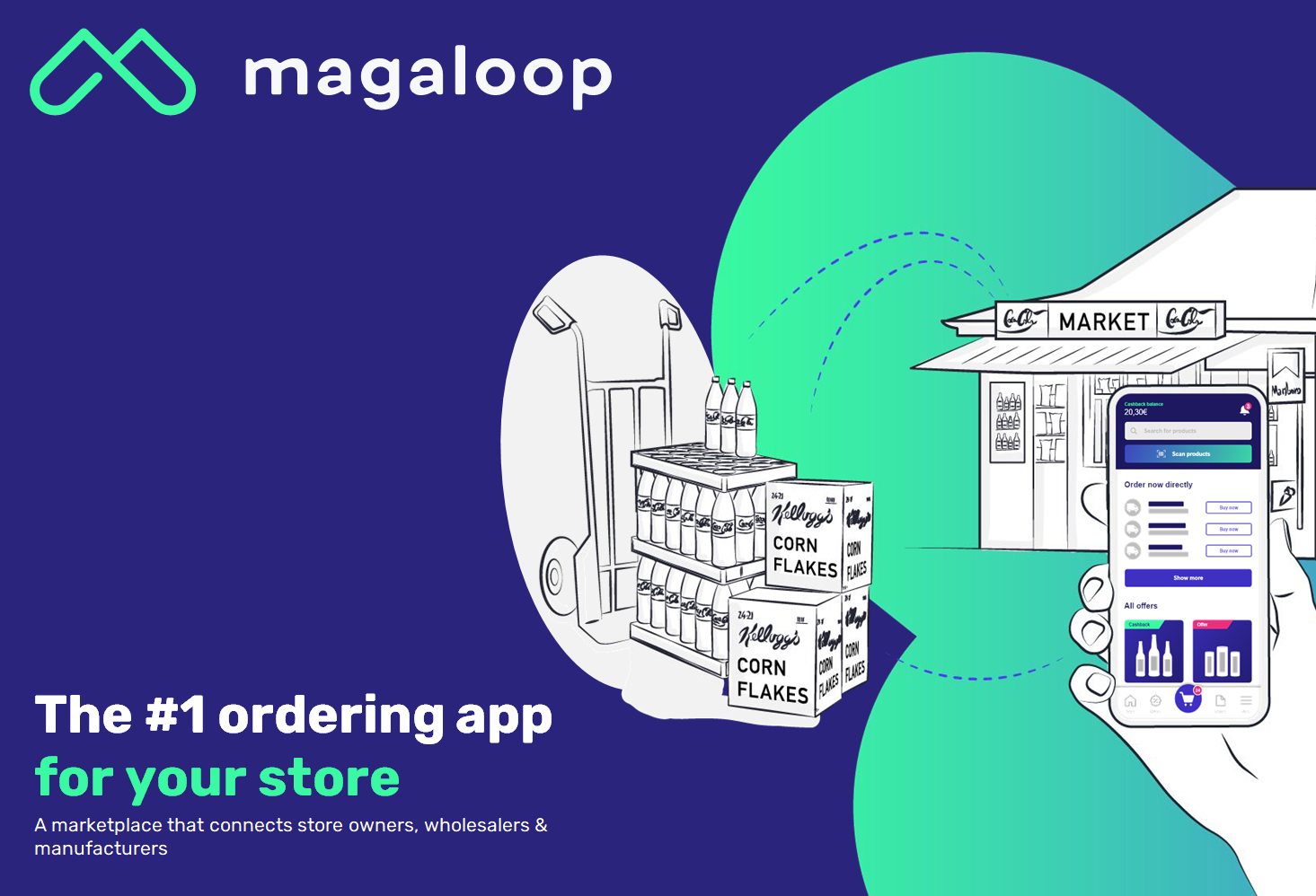 Berlin, May 12, 2022 – MagaLoop, the leading digital B2B marketplace in Europe, has raised €9 million in Series A funding for its app-based ordering platform which connects independent retailers such as convenience stores, bakeries, gas station stores and late-night grocery stores directly with suppliers. The app allows customers to order everything from chewing gums to drinks through one tap. This leads to improved product availability as well as fast and efficient ordering processes removing administrative burdens faced by small business owners. Moreover, the app offers smart features like a barcode scanner to reorder items or a comprehensive order history.

“With the new round of financing, we can continue to drive and specifically shape the structural change in the impulse channel aiming for sustainably strengthening the competitiveness and future viability of the small, independent retailers,” said Uwe Hölzer, co-founder at MagaLoop. “As the only digital platform in this market segment, we are in an excellent position to further expand our market leadership in the coming years.”

Marcin Zabielski, Managing Partner of Capital explained: “One of our investment theses in Market One Capital is, that European, traditional, wholesale distribution will be digitized in the following years. More and more owners of small stores and kiosks will choose convenience and additional, financial and logistic services over the current, imperfect model. We support MagaLoop almost since the very beginning because they realize this ambitious vision.”

With the fresh funding, MagaLoop will further expand its network of independent wholesalers and retailers and drive additional platform expansions. The marketplace has been growing rapidly since its founding in 2018 and has already reached a market share of 15 percent in Germany. MagaLoop showed accelerated growth again in 2021 and currently has more than 4000 active merchants with an order volume of over €100 million annually.

In general, independent retailers are largely undigitized and disconnected, and struggle with inefficient and outdated ordering processes.

It was to solve this inefficiency and ensure convenience stores as well as other independent retailers remain competitive in the fast-changing grocery and retail space, that MagaLoop developed an ordering app which provides structure to what has always been a highly fragmented market worldwide.

With its innovative app, MagaLoop offers more transparency and efficiency throughout the ordering process. Other advantages for users: Bundling the demand of many small independent stores results in improved purchasing conditions which allows both retailers and wholesalers to benefit from incremental sales and increased profitability. For FMCG manufacturers, numerous new distribution points are being created as well.

In the past year, the company has integrated its app with financial solutions aimed at systematically improving the value chain. With the MagaLoop BNPL solution, orders are processed more efficiently, transparently and quickly than before.

Since the beginning of 2022, the company has also been offering direct distribution to its independent retailers via service hubs in North Rhine-Westphalia and Hamburg. This allows FMCG brands to centrally manage the entire marketing for the convenience store sales channel (impulse channel) and to dramatically cut down the time-to-market for their innovations and new products. Further direct distribution hubs are already planned. The next location in Frankfurt is scheduled to go online on June 1, 2022.

MagaLoop is a digital B2B marketplace that connects independent retailers directly with suppliers via the free app of the same name. The digital tool ensures fast and efficient ordering processes, for example via smart features such as the barcode scanner or order history, and thus helps small retailers such as bakeries, kiosks, late-night stores, snack bars and gas station stores to better manage their resources. Wholesalers and FMCG manufacturers also benefit from the solution by gaining access to the retailer network as well as in-depth data on the flow of goods. The start-up was founded in 2018 by Uwe Hölzer and Michael Högemann. Based in Berlin, MagaLoop currently employs around 70 people. Further information at: www.magaloop.com.